It never fails, this kind of crap.

I think I dreamed it after the sky had begun to lighten, after a miserably fitful night (pollen is covering everything in a grimy yellow veil, my sinuses are trying to break out of the front of my head, the Cute Engineer snores). Torvald had an appointment at the cardiology practice at eight-thirty in the morning — after years of finishing work at nine several evenings a week, I don’t do eight-thirty AM very well — and I was already nervous about the traffic, even if the Engineer was driving.

In the dream, I woke up and it was already seven-forty, but the Engineer was still sleeping. I struggled up and pushed myself to get dressed, finding that somehow we had changed our geographic location to the part of Maine where he grew up, and we were going to a veterinary practice in the nearest town. If you’ve ever been to Maine, you know — it’s my most vivid memory anyhow — that everything is a half hour away from everything else. Trying to wash my face, I was interrupted by an old woman who was apparently part of a senior living facility that had been set up in the house. She wanted some kind of service. I got rid of her and asked when, when were we going to leave. Enter the Engineer’s dad, who was apparently coming with us, and decided to get naked while we were waiting for his son — not, I hasten to add, in any lecherous way, but because “we’re going to wait a while, so let’s be comfortable.” Finally we got into town, while I said despairingly “Do you want him to die because he was Al’s cat?” My late and ex husband had been gone two years before Torvald was even born, but by this time he was Bob, who in life had been the Engineer’s cat anyway, though by the time we opened the carrier at the clinic, it was a little female cat with tortie markings – there are two in this house now, but she didn’t seem to be quite either one — that had faded from her ailment like the colors in an old photo, her eyes swollen shut.

They went in the exam room with the doctor, and left me outside. And as I tried to peer into the small window let into the room’s door, a trenchcoated creep of the classic vintage approached and began trying to maul and kiss me, his eyes hidden by heart-shaped children’s sunglasses with opalescent blue plastic frames. The Engineer looked out, saw what was going on, and ignored it.

When I wake up from these things it feels as if there is a building on my chest. 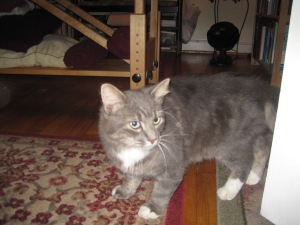 The reception area mugged us with warmth. A little dry-erase board at the desk said “Welcome Torvald!” (When we left, an hour later, it said “Be well, Torvald! Welcome Bobo!”)

“Kind of a bold statement having this many Oriental-style carpets in an animal hospital,” said the Engineer.

The receptionist asked if I would we willing to have Torvald’s photo and story on their Facebook page. He is rather the glamor cat so I signed off on it. They said they would contact me for some pictures and a bio.

The ultrasound room was equipped with a slotted table so the vet could reach under the cat with the probe. Torvald put up with being flipped on his side and the stinky ultrasound gel remarkably well. Right atrium and ventricle, then left. Rainbow-colored eddies showed backwash and turbulence in his feisty little heart, a constricted ventricular outlet, a floppy mitral valve. Torvald started to say Fuck You during the last image of about twenty.

“The median survival for cats with heart failure is nine or ten months,” said the vet, neither kindly nor unkindly, just filling me in, as he drew on a laminated heart graphic to show where the problems were. He listed a roster of familiar drugs: a beta blocker, a platelet inhibitor, low dose aspirin. I listened and cross-questioned him and broke out all my clinical chops. So the hypertrophied ventricular wall would reduce stroke volume? The contractile and relaxation capacity of the muscle are both compromised? You don’t get nephropathy with this aspirin dosage?

Torvald’s fur looked a little dreadlocked and rough. When cats feel crappy, they don’t groom, and he was only starting to perk up after Tuesday night’s meltdown. I made a note to use the Furminator on him, but tomorrow; sufficient unto the day is the fuckery thereof. 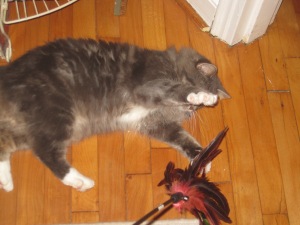 He learned to be a proper housecat

“Are you okay?” said the engineer as we got in the car. I told him yeah. We’ll just take care of him as long as he is still having a good time. “He’s still climbing up his cat tree and he ran for breakfast this morning,” I pointed out. “And it all depends how he handles the meds.”

The classical station programmer is very fond of Franz Liszt’s transcriptions. The Ave Maria is probably the Schubert song you know if you don’t know any other; the text is a German translation of Walter Scott’s Lady of the Lake (the Germans could not get enough of Scotland, for some reason — cf. Mendelssohn and Max Bruch).

Ave Maria! maiden mild!
Listen to a maiden’s prayer!
Thou canst hear though from the wild;
Thou canst save amid despair.

I have not been a Jungfrau these forty-three years, nor have I religion, but neither is required for the primitive wish that there be someone, some Artemis to draw the arrows or Kuan Yin to have compassion, and that was when I lost it in the back seat.

Torvald, uncorrupted by stupid human grief, put his paw through the mesh of the carrier.

UPDATE: for people who have checked this post, for now Torvald is doing remarkably well on his medication. I had to go to the mat with the vets about his dose, which really wasn’t enough for a big kitty like him, but once we got that adjusted he became his old self, pouncing on his buddy and bustling around the house with restored vigor. He is so good about taking his pills it flabbergasts me, though I have to strongarm him with one drug or another a total of four times a day. He’s not allowed out on the porch in the hot sticky Washington summer though, and the expression on his face says “later for you!” 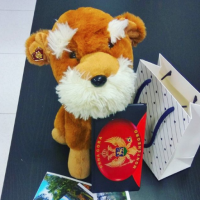